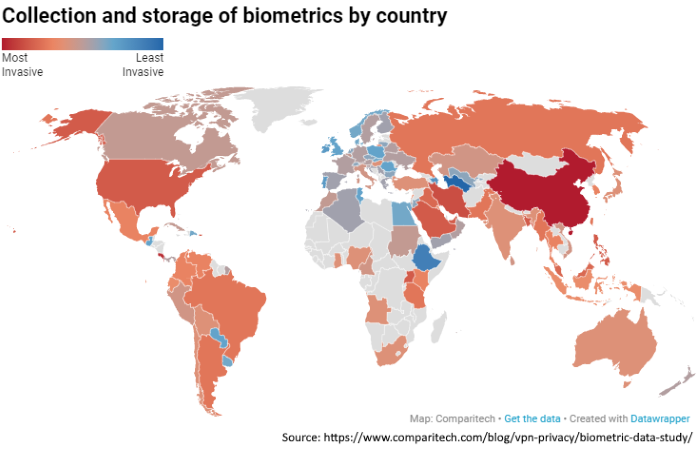 Researchers ranked 96 countries by their collection and use of biometric data.  Biometrics are gathered and stored as part of international travel, banking, law enforcement, healthcare tracking, and general surveillance by governments.

The the danger with biometrics is that once any government or entity has them, they might be able to track your activities for the rest of your life. Biometric markers are chosen for accuracy and longevity. There is no reset or reissuance. If a cybercriminal obtains it, they may attempt to impersonate you or validate transactions with your identity! Privacy matters.

Top 5 worst countries for biometric data collection and use

These countries received the lowest scores overall, meaning they are showing a concerning lack of regard for the privacy of people’s biometric data. Through the collection, use, and storage of biometric data, these countries use biometrics to a severe and invasive extent.

Some key areas for concern in China are:

Some may have hoped that China’s draft personal information protection law would help improve its biometric use. But genetic and biometric data is excluded from the definitions and from within the law.

Costa Rica only receives 3 points as it is only just beginning to implement facial recognition within the country and it allows a small number of countries to enter visa-free.

Particularly concerning is Costa Rica’s two new national biometric databases. One will include every Costa Rican over the age of 12 and the other every foreigner that enters the country. Police also have full access and both will help facilitate the upcoming facial recognition systems.

At present, the data protection law in Costa Rica doesn’t protect biometric use or recognize biometrics as sensitive data.

The biggest shock in the bottom 5 is the United States, which ranks as one of the fourth-worst countries for biometric data collection and use. This year, it remains fourth-worst, despite a further 45 countries being included in the study this time.

Most concerning is its lack of a specific law to protect citizens’ biometrics. While there is a handful of state laws that protect state residents’ biometrics (as can be seen in our state privacy study), this does leave many US citizens’ biometrics exposed as there is no federal law in place. And this is despite the widespread and growing use of facial recognition in public places, biometrics within the workplace, and fingerprints for visas.

It’s a similar picture in all of the other fourth-worst countries, with large biometric databases with police access, inadequate or no legislation to safeguard biometric use, and growing/extensive facial recognition use.

Both of these countries have biometrics within their passports, ID cards, and a large biometric database with police access. Neither have a data protection law that considers the use of biometrics and facial recognition CCTV is also largely implemented in these countries.