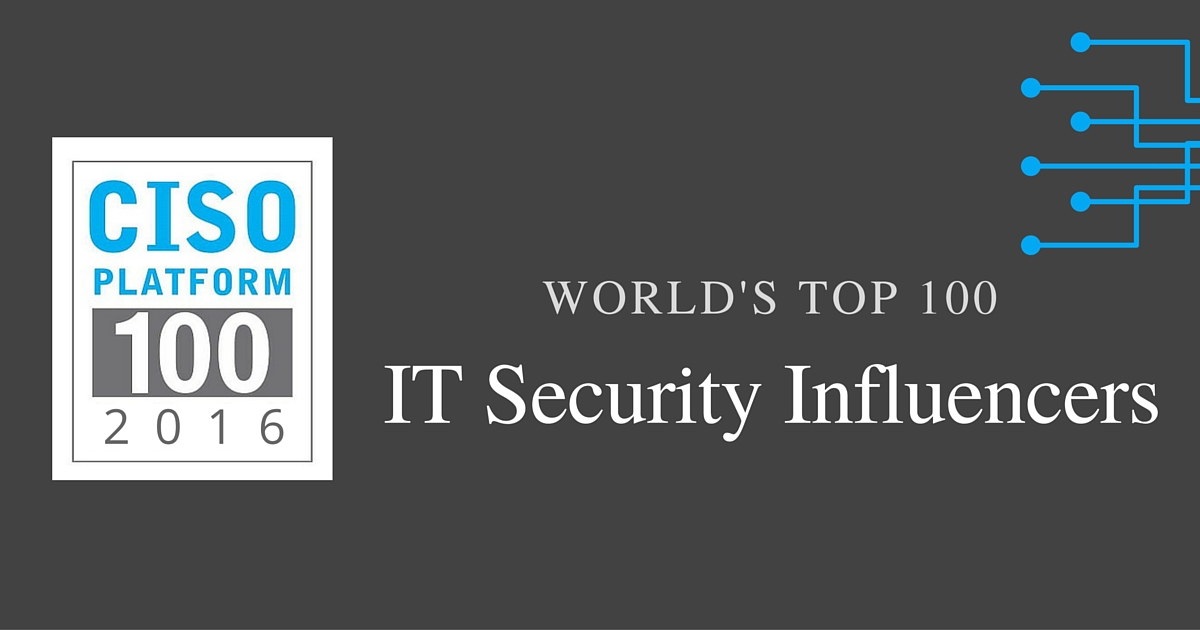 CISO Platform recognizes World's Top 100 IT Security Influencers who have/are impacting the information security industry's in various ways. This list includes top researchers, industry experts, leading entrepreneurs, a must follow for infosec industry. The list will be declared in 4 parts each with 25 Top Influencers, this is the first part.

Kevin is often known as The World's Most Famous Hacker. He is the author of several books in the field of security and actively writes and tweets on security. He runs Mitnick Security Consulting, LLC that helps test a company's security strengths, weaknesses, and potential loopholes. He is active in various companies as board member as well as adviser. Kevin also helps consumers from students to retirees, learn how to protect their information.

He is best known as the 'PHP Security Guy' in the security community. He was the first to boot Linux directly from the hard disk of an unmodified XBOX through a buffer overflow in the XBOX font loader. Following year he founded the project named 'Hardened-PHP' which aimed at developing a more secure version of PHP, known as Hardened-PHP, which evolved as the Suhosin PHP Security System.

Eugene Kaspersky is an IT Security expert, CEO and co-founder of Kaspersky Lab. He was voted the World’s Most Powerful Security Exec by SYS-CON Media in 2011, awarded an Honorary Doctorate of Science from Plymouth University in 2012, and named one of Foreign Policy Magazine’s 2012 Top Global Thinkers for his contribution to IT Security Awareness' as mentioned on the Kaspersky website.

Ramy Raoof is a technologist and digital security researcher who engages with human rights initiatives, NGOs, journalists, lawyers, youth groups, university students and CSOs on various topics. In the course of his work, he provided and developed digital security plans and strategies for NGOs and media personnel, urgent support and interventions in cases of confiscation and raiding offices, support on publishing sensitive materials, secure systems for managing information about sexual violence and torture survivors, and developed operational plans for human rights emergency response teams.

Brian Krebs is a journalist & investigative reporter. Krebs is the author of KrebsOnSecurity.com, a daily blog on computer security and cybercrime. He is also known for interviewing hacker 0x80. On March 14, 2013, he became one of the first journalists to become a victim of Swatting.

Mikko Hypponen is the Chief Research Officer at F-Secure since 1991. He actively speaks at various security conferences including Black Hat,RSA etc. His TED Talk is one of the most viewed computer security talks in the world. He played significant role in research on virus and computer worms like Blaster & Sobig Computer. He actively writes and tweets on IT Security.

Bruce Schneier is an internationally renowned security technologist. He has been called "Security Guru" by The Economist. He is a fellow at the Berkman Center for Internet and Society at Harvard Law School, a board member of the Electronic Frontier Foundation(EFF) and the Chief Technology Officer at Resilient Systems. Bruce has authored several well known IT Security books and also made significant contribution in IT Security research.

Dr. Eric Cole is an industry-recognized security expert with over 20 years of hands-on experience who has experience in information technology with a focus on perimeter defense, secure network design, vulnerability discovery, penetration testing, and intrusion detection systems. Dr. Cole has a master's degree in computer science from NYIT and a Doctorate from Pace University. He has authored several books like Hackers Beware, Hiding in Plain Site, Network Security Bible, Insider Threat. He is an inventor who has filed over 20 patent applications. He is also a member of the Commission on Cyber Security for the 44th President. Dr. Cole is founder of Secure Anchor Consulting in which he provides state of the art security services and expert witness work. He is a SANS faculty fellow and course author.

Charlie Miller is currently an engineer in Uber post his role in Twitter.Interestingly he was a computer hacker for National Security Agency for 5 years. He has a Phd in Mathematics from University of Notre Dame.He is a four time winner of the Pwn2Own competition. He has discovered plenty vulnerabilities with Apple products. He had found a hack for both the iphone and android when they were released first.

Christopher is a privacy researcher and activist who currently serves as the principal technologist at American Civil Liberties Union. His research has revealed various surveillance techniques used by law enforcing authorities in the US. He has also co-created Do Not Track privacy anti-tracking mechanism which have been used by major browsers. Earlier he has worked for FTC's Division of Privacy and Identity Protection which included investigating Facebook, Twitter, MySpace, Netflix etc. He deals into the thin line between Digital Privacy Rights and Government Surveillance.

Dan Kaminsky has been a noted security researcher for over a decade, and has spent his career advising Fortune 500 companies such as Cisco, Avaya, and Microsoft.Dan is best known for his work finding a critical flaw in the Internet's Domain Name System (DNS), and for leading what became the largest synchronized fix to the Internet's infrastructure of all time. Dan is presently developing systems to reduce the cost and complexity of securing critical infrastructure, as mentioned on Dan Kaminsky's Blog.

Graham Cluley is an award-winning security blogger, researcher and public speaker. He has been part of the information security industry since early 1990s. He is one of the world's leading experts in viruses and spam .He has also written regular columns on information security for IT Week, Computer Weekly, VNUNet etc. while he continues his super exciting blog grahamcluley.com .

David Kennedy is Founder of TrustedSec, LLC and Co-Founder and CTO of Binary Defense Systems (BDS). He was also one of the founding members of the “Penetration Testing Execution Standard (PTES)“. He is the creator of several widely popular open-source tools including “The Social-Engineer Toolkit” (SET) and more. He is also co-author of the "Metasploit: The penetration testers guide". Before he plunged into the private sector, he worked for the United States Marine Corps and deployed to Iraq twice for intelligence related missions.

He is currently the product strategist at Tenable Network Security. Previously he was the founder & CEO at Security Weekly. He is the host of PaulDotCom Security Weekly (http://pauldotcom.com) which is a weekly podcast discussing all things IT security including interviews with some of the top security professionals. He is also the co-author of Ultimate WRT54G Hacking, a book dedicated to embedded device hacking and wireless technology as sourced from his RSA speaker profile.

His specialities include Computer & Network Security, Cryptography & Steganography, Computer Forensics & Signal Processing. While he serves the security industry he keeps close connect with academia and research. He is the Professor in the Computer Science Department of Faculty of Engineering and Physical Sciences at the University of Surrey. His achievements have resulted in him being elected as a Fellow of various institutions including the British Computer Society, Institute of Physics and Royal Statistical Society.

Matthew is a cryptographer & professor at Johns Hopkins University who has designed & analyzed various crytographic systems used in payment systems, wireless networks etc.Recently his work focuses on developing privacy-preserving cryptographic protocols for implementing anonymous electronic cash and identification. Additionally, he has been working on new automation techniques to assist in the design and deployment of advanced cryptographic protocols as sourced from the University Profile.

Joshua Corman is currently the CTO for Sonatype, the software company that enables developers to rapidly build secure software. He co-founded Rugged Software and IamTheCavalry, to promote new security approaches in response to the world’s increasing dependence on digital infrastructure. He is a well known security strategist in the information security industry. His unique approach to security, in the context of human factors, adversary motivations and social impact, has helped position him as one of the most trusted names in security.

Dave is currently the Global Security Advocate for Akamai Technologies. He is the founder of the security site Liquidmatrix Security Digest and co-host of the Liquidmatrix podcast. Dave also serves on the (ISC)2 Board of Directors. He has worked for a defense contractor as a security consultant to clients such as the FBI, US Navy, US Department of Defense & many others. He is a Forbes contributor and a CSO Online writer.

Katie Moussouris is the Chief Policy Officer for HackerOne. She has earlier worked on initiatives such as Microsoft's bounty programs, BlueHat content chair, security researcher outreach, Vulnerability Disclosure Policies & Microsoft Vulnerability Research. She is also a subject matter expert for the US National Body of the International Standards Organization (ISO). She is an ex-hacker, ex-Linux developer. She has received the 2011 Executive Women's Forum Women of Influence Award in the category of One to Watch.

( Read more: Security Metrics and Dashboard for the CEO / Board )

Richard Bejtlich is Chief Security Strategist at FireEye. Formerly, he was Mandiant's Chief Security Officer. Earlier he was Director of Incident Response for General Electric, where he built and led the 40-member GE Computer Incident Response Team (GE-CIRT). He is also an advisor to Threat Stack, Sqrrl, and Critical Stack who is pursuing a Doctor of Philosophy in War Studies at King's College London. Richard is a graduate from Harvard University & the United States Air Force Academy. His has authored several books and actively blogs as well as tweets.

Simon Crosby is Co–founder and CTO at Bromium. He was founder and CTO of XenSource, which was later acquired by Citrix. Following this he served as CTO of the Virtualization and Management Division at Citrix. Previously, Crosby was a Principal Engineer at Intel, where he led strategic research in distributed autonomic computing, platform security & trust. He was also the Founder of CPlane Inc., a network optimization software vendor. Prior to CPlane he was a tenured faculty member at the University of Cambridge, UK, where he led research on network performance & control & multimedia operating systems.

Runa A. Sandvik is a privacy & security researcher who helps media organizations improve their security posture. She works at the intersection of technology, law and policy. She also teaches digital security to journalists & was a teacher at Folkeuniversitetet during 2008. Runa is also a technical advisor at the Freedom of the Press Foundation & a member of the review board for Black Hat Europe.

Andy Ellis is Akamai's Chief Security Officer (CSO). He is responsible for overseeing the security architecture and compliance of the company's massive, globally distributed network & is the patentholder of Akamai's SSL acceleration network, as well as many other critical technologies related to Akamai's Cloud Security Solutions. An MIT graduate, recipient of the CSO Magazine Compass Award & many more accolades.

Alex Stamos is the CISO of Facebook currently, previously he was the CISO at Yahoo. He was the co-founder of iSEC Partners and founder of Artemis Internet. He is a noted expert in Internet infrastructure, cloud computing and mobile security. He is a frequent speaker at conferences such as Black Hat, DEF CON, Amazon ZonCon, Microsoft Blue Hat, FS-ISAC and Infragard. He holds a BSEE from the University of California, Berkeley. He is also a part of the reviewing board at Black Hat.He personally blogs at unhandled.com.

*Profile details have been sourced from various online resources such as LinkedIn,Twitter & others. In case of any queries you may address a mail to contact@cisoplatform.com to resolve it.

Views: 2650
Tags: IT, Influencers, Security
E-mail me when people leave their comments –
Follow
Posted by pritha