The gateway-like devices use powerful processors, extendable memories and no constraints on power source. They can route data to the cloud servers or aggregate/store data to deal with network latencies. Typically they run Linux operating system with application containers and provision for remote management. 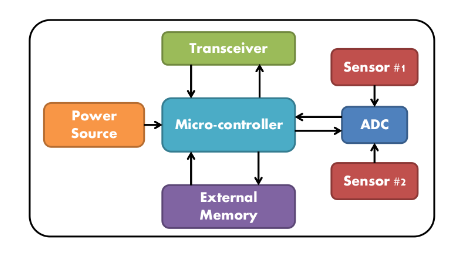 The constraints of these devices are

Class 0: Class 0 devices have constraints in memory(<<10KiB of RAM and <<100KiB of Flash) and processing capabilities. These devices has severe constraints to communicate securely with internet, so they typically pre-configured and are connected to proxies, gateways, or servers for internet communication.

An open source IoT OS like Contiki takes around 8-20 KiB of RAM and ~100 KiB of flash. In table 1 and table 2, by Oikonomou, G et al, the code and memory footprint for various components of the Contiki operating system were listed. Table 1 consists of message generation and handling and does not include routing table processing or packet forwarding. So the complete stack (without security and routing) needs around 90 kiB of flash and 5.5 kiB of RAM. Enabling TCP  increases the code by 11 KiB and RAM usage by about 600 bytes. 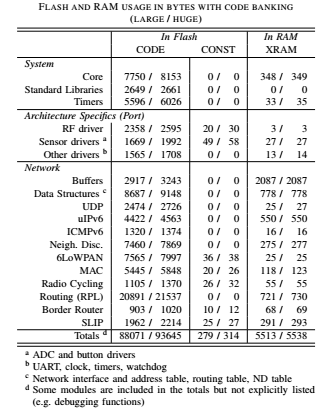 As the number of nodes increases, the size requirements for the routing and neighbour tables increases in Contiki. As shown in Table 2, it takes from 5.5 KiB to 9 KiB of RAM size. 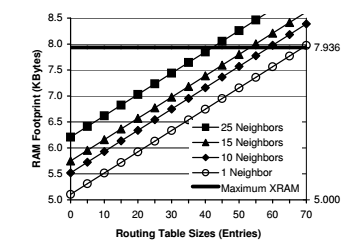 From the above tables, minimal network stack takes up most of the resources of class 0 devices and it is tough to fit anything more like security layer and application layer protocols like MQTT, CoAP, EXI etc

Class 1: Class 1 devices can have low power IoT stack [UDP, CoAP, leight weigh security protocols like DTLS etc] but quite constrained in code space and processing capabilities to employing a full protocol stack such as using HTTP, TLS, and related security protocols and data representations with out a gateway.

Class 2: Class 2 devices are less constrained and can perform at par with mobiles phones/notebooks in supporting most the protocol stacks. They have to be lightweight with  energy-efficient protocols and less bandwidth consumption. Using Class 2 devices might reduce development costs and increase the interoperability.

3. Oikonomou, G., Phillips, I., Experiences from porting the Contiki operating system to a popular hardware platform.

Views: 8994
Tags: and, applications, are, categories, classification, devices, for, iot, methods, of, their, what
E-mail me when people leave their comments –
Follow