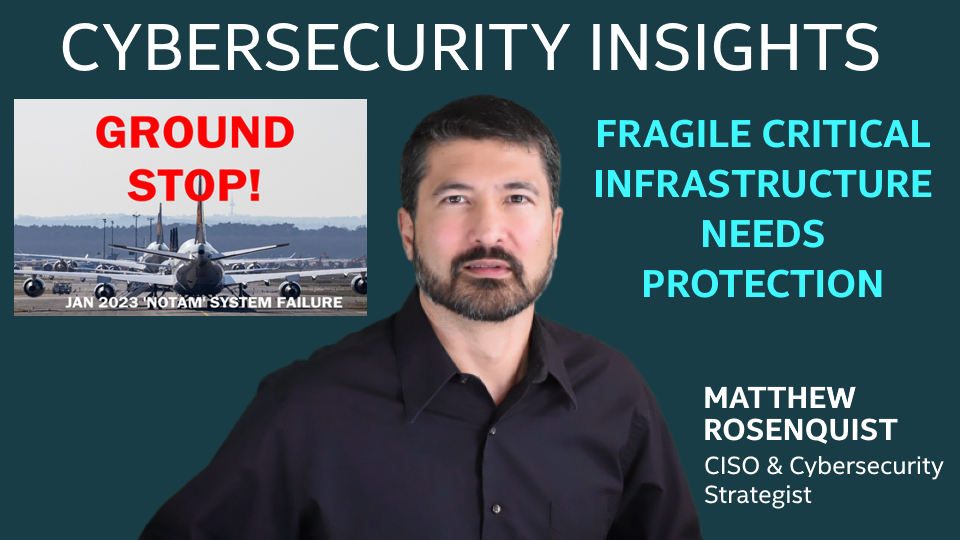 The recent outage of the Federal Aviation Administration’s Notice to Air Missions (NOTAM) Pilot-Alert system, which triggered a 90 minute “ground stop” delayed over 9 thousand flights and was behind the cancelation of 1300, leaving countless flyers stranded and planes grounded.  The outage shows the fragility of the transportation system, one of many components of the nation’s overall critical infrastructure sectors.

The system at the center of this incident, alerts pilots about potential hazards to their flights, including closed runways, outages, other important safety data.  It is not used to fly the plane or by Air Traffic Controllers to keep aircraft at safe distances.

Initial reports point to corrupted system files which required a fix and system reboot.  The backup system were also reliant on the corrupted data feed, thereby creating a Single Point of Failure (SPOF).

The White House announced “There is no evidence of a cyberattack at this point, but the President directed Department of Transportation DOT to conduct a full investigation into the causes,”

This may not have been part of a cyberattack, but regardless it shows the fragility of our nation’s critical infrastructure.  Single Points of Failures are common and can exist across technology, processes, and people.  In this case, a notification system was disrupted that prompted the FAA to invoke a ‘ground stop’ order.

If it was not a cyberattack, it is surely on the list for attackers to target in the future.  Knowing that by impacting one notification system can cause a full ‘ground-stop’ for all flights is practical intelligence for attackers.

You see, attackers don’t always need to directly bring down the big highly defended critical systems to cause significant impacts.  Knowing that one small subroutine or piece of the puzzle will cause the system to respond by shutting down all flights, is golden to interested attackers.

That’s why this incident is so important.  It shows why cybersecurity professionals must be tasked with protecting our nations critical infrastructure sectors and work to identify such Single Points of Failures,  and the resulting chain reactions, in order to better protect our physical world that relies on digital systems.